skip to main | skip to sidebar

Liverpool could not have asked for a better set-up, beating bitter rivals Manchester United 2-0 at Anfield in their first ever European meeting, which was the first leg of the Europa League Last 16. 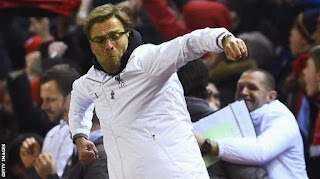 And it could, should and would have been a much worse thrashing and thorough beating if it were not for the Red Devils’ star keeper David De Gea.

Jürgen Klopp’s men took the lead thanks to a Sturridge 20th minute spot kick, after Memphis Depay fouled Clyne in the box, and it was more than deserved with the Reds having outplayed and outclassed LVG’s eleven by far.

The visitors did not create a single chance with Liverpool giving them no time on the ball, surrounding them at every chance, and can only thank de Gea’s brilliance for keeping them in the tie with a hint of a shout. Marouane Fellaini was lucky to stay on the pitch with a very clumsily dirty displace.

This impressive win ended United’s run of four consecutive victories in the two sides’ meetings. The only disappointment for the Reds was that they did not score more. An away goal at Old Trafford in the second leg should do it. If it’s not already done.

United’s only shot on target came in the 51st minute, a tame low effort my Morgan Schneiderlin, not much to do for Simon Mignolet. The Red Devils will have to dig so much deeper if they want to come back from this one.

With the FA Cup giving Liverpool a break this weekend, whilst United face West Ham in the quarter final, the power and score advantage stays with the Reds from Merseyside. Only time will tell and we’ll know come Thursday night whether they will bounce and pounce, or slip and trip, with for and consistency being neither sides’ main feature or strength this season. 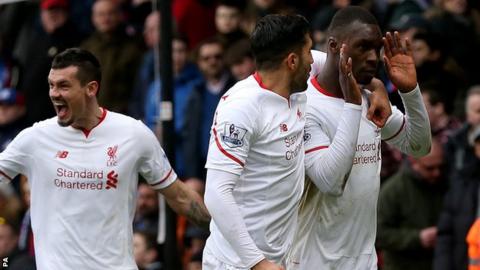 Crystal Palace had lead through Joe Ledley’s finish a couple of minutes after the interval, netting the ball following a bit of ping pong in the box off a corner.

Jürgen Klopp’s men saw the frustrating afternoon go from bad to worse when James Milner was sent off for a second yellow card just after the hour-mark.

However, this setback seemed to spurn on the Reds more than before, making them more possessive and productive with the ball.

But it took a slipup by Palace keeper Alex McCarthy to get the visitor back into the match, handing the ball to Roberto Firmino, who couldn’t miss, to make it 1-1 in the 72nd minute.

Liverpool took over from then on, covering and creating more, Benteke brought on with ten minutes to go and a point to prove.

In the last seconds of stoppage time, Damien Delaney made contact with Benteke’s ankle, bringing down the striker in the box, referee Andre Marriner awarding the penalty guided by his assistant.

Benteke stepped up to put an end to his 715 goalless minutes in all competitions and made no mistake of converting the winner.

It was a very different victory compared to the Reds’ impressive 3-0 win over Manchester City midweek, showing more evidence of Liverpool’s inconsistency and/or a good case of Klopp’s renowned resistance/comeback philosophy/mentality (aka “Gegenpressing”).

Liverpool ran further as a team than Palace over 90 minutes (113km-111km respectively), man of the match Adam Lalllana covering most of that and passing 92% accurate, good to watch.

Palace have now gone 12 Premier League matches without a win (D4, L8), the current longest winless run in the top flight, frustrating and disappointing for Alan Pardew and his men, especially after a better first half and taking the lead against Liverpool.

Klopp and his men will take more hope and inspiration from the second half display and comeback, and will need it, facing fears rivals Manchester United next in the Europa League.

City lift the Capital One Cup

Manchester City lifted the League Cup for the fourth time (1970, 1976, 2014 and 2016) thanks to second-choice goalkeeper Willy Caballero's heroic performance with three penalty saves which saw his side record a 3-1 shoot-out victory over Liverpool after the sides drew 1-1 in extra time at Wembley.

The 34-year old denied Lucas Leiva, Philippe Coutinho and Adam Lallana from the spot, rewarding his boss Manuel Pellegrini for choosing him ahead of first choice Joe Hart. The Argentinian stopper also kept out Divock Origi's header spectacularly earlier on in the match.

At the other end, Reds keeper Simon Mignolet had a very mixed afternoon. The Belgian let Fernandinho's shot slip through under his body to concede the opener shortly after the break. His side had dominated possession in the first half, but were unable to take advantage.

Daniel Sturridge gave away the ball on numerous occasions, unable to produce anything of note, caught offside most of the time, undoing his team mates' hard work, especially Lucas and James Milner.

After Mignolet's leak, City took over and looked to build on their lead through Sergio Aguero on a few occasions. But the red number 22 redeemed himself with a couple of breathtaking saves.

It was a game to forget for Raheem Sterling against his former side. Similar to Sturridge, he kept giving away the ball, missing chances, wasting sitters, looking just not there.

Coutinho got the Red spirit back up and going late on, in the 83rd minute, seeing in the ball to level the score after Lallana had hit the post at the far end.

It finally got the competition back running and steaming through to extra time with both keeper's kept busy and teams sweating.
But penalties it was in the end. And after Fernandinho had hit the post with City's first kick, it looked like Jürgen Klopp's men were going to steel the show.

However, it was not to be. With Caballero's star performance and Jesus Navas and Aguero's conversions, it was Yaya Toure who sealed the deal, converting the winning penalty, giving Pellegrini his third major trophy in as many seasons and condemning Liverpool to their fourth League Cup final defeat (1978, 1987, 2005 and 2016).

It was the Red's fourth penalty shootout defeat in the competition, making it four defeats in 18 shootouts. Klopp has reached a cup final in each of his last five seasons as a manager, but has lost four. Tough luck?

The Merseysiders can seek revenge as the two sides will meet again midweek, in the Premier League, at Anfield, where the Kop will want to see Blue blood.

Manager reaction:
Jürgen Klopp: "We feel down but now we have to stand up. Only silly idiots stay on the floor and wait for the next defeat.
"We will strike back. We have felt how it is to lose. It is not the best moment but on Monday morning maybe we can change everything.
"We will go on and we will get better. We have to work really hard, carry on and there is light at the end of the tunnel. This is important."

Manuel Pellegrini: "I was concerned about the amount of chances we missed. After that we played better in extra time.
"It's a very important moment, and it's always very special to win a title at Wembley."

My views and questions:
Klopp sounded very much like Gerry and the Pacemakers... At the end of the storm... Is a golden sky...

The stats say it all! The Reds tried hard, with more of the ball (more possession), but did less with it (less chances on and off target).

Sturridge frustrated me most, so many offsides and wastes (8-0)!!! Will Christian Benteke get a chance in the next clash against City?! I doubt it and don't like it!
Both cases of Sturridge and Sterling show, stars cannot and do not shine the same on their own.

After this frustration, we need more variation, change. The summer cannot come quick enough for Klopp. Let's hope there will be more changes then, than there were in January, disappointingly and surprisingly.

I keep thinking of the following German song that fits my (and probably Klopp's) football mood and thoughts: Was soll das?! Womit hab ich das verdient?! (Translation: What's the point?! What have I done to deserve this?!) Here is the full version: https://youtu.be/6tFoIu9nhYQ
Posted by Sonjahaha at 14:29 No comments: Links to this post

Sonjahaha
Berlin, London, Paris
I'm a passionate sports fan, especially football and cricket, LIVERPOOL and ENGLAND; talkative and curious writer and blogger; German by birth (mother), English by heart (father), and French in progress (hubby, work and home). Love flying, travelling, learning, reading, writing, watching comedy and crime series, documentaries and films; listening to music and the radio, going to the cinema, wining, dining, meeting up, socialising and chatting with friends. Always up for a challenge and a laugh! You can find out and read up more about me and my other passions, thoughts, likes and dislikes on: My general news and life blogs: http://sonjasnewsworld.wordpress.com/ My poems and stories: http://work-thoughts-and-stories.webs.com/ My tweets: https://twitter.com/#!/Sonjahaha & @ByTheMinLFC & @ByTheMinCricket where I am also a regular contributor, covering live football and cricket action mainly.