skip to main | skip to sidebar

Liverpool got well and truely beaten at Fratton Park.

Portsmouth never looked out of control. They took the lead just past the half-hour mark thanks to Nadir Belhadj who connected to a Glen Johnson header after Pepe Reina thought he had saved and cleared Kevin-Prince Boateng's strike off Hassan Yebda's cross.
It was the first real chance of the match for either side, Johnson coping and reacting weakly and clumsy against his former side.
Things went from bad to worse for Liverpool just before half time when Javier Mascherano saw red for a puch-/strangle-hold tackle against Tal Ben Haim. As it is his second red card of the season, he will be suspended for the next four matches, to make Liverpool's Christmas and New Year even more dire.
The second half continued in a hardly better trend for the Reds, wasting chances and tackling clumsy.
Portsmouth keeper Asmir Begovic kept the main and only scare out well (67). After being sent the wrong way by two deflections through the sleeping Pompey defence, he kept the ball out with his right hand, instinctively and decisively.
Dirk Kuyt and Lucas Leiva were once again the most frustrating, not able to keep hold of or aim with the ball, total wastes. Jamie Carragher and Johnson looked just as unable to cope at the back.
Boateng capped off a fine display by providing Frederic Piquionne from the right, who netted the ball from a tight angle with a right-foot bounce-volley (82).
Pompey celebrated a fully deserved win. Rafael Benitez meanwhile is looking greyer and older by the match, leaving his substitutions too late and seeming to lack options, alternatives and hope more and more so.
Portsmouth Begovic; Finnan, Ben Haim, Kaboul, Hreidarson; Yebda, Boateng (Mullins 89), Brown (c), O'Hara, Belhadj; Piquionne (Kanu 93). Bookings Yebda 48, Piquionne 82. Subs not used Ashdown, Wilson, Hughes, Utaka, Dindane.
Liverpool Reina; Johnson, Carragher, Agger, Insua (Aurelio 68); Kuyt, Lucas (Spearing 88), Gerrard (c), Mascherano, Dossena (Benayoun 53); Torres. Bookings Lucas 47, Torres 56, Johnson 60. Red Mascherano 45. Subs not used Cavalieri, Skrtel, Babel, Ngog.
1st half stats
Portsmouth-Liverpool
Attempts: 6-3
On target: 3-1
Offsides: 0-0
Corners: 4-4
Free kicks: 7-4
Possession: 44%-56% (20.min)
2nd half stats
Portsmouth-Liverpool
Attempts: 6-4
On target: 2-1
Offsides:0-2
Corners: 3-5
Free kicks: 7-3
Possession: 60%-40% (2nd half, 59.min)
Sky Sports stats
Portsmouth-Liverpool
Possession: 45.3%-54.7%
Passing Success: 73.8%-74.9%
Tackles/Success: 33/84.8%-22/77.3%
Territorial Advantage: 52.8%-47.2%

Referee: L. Mason
Man of the match: Nadir Belhadj
Posted by Sonjahaha at 10:07 No comments: Links to this post

Top game: Tottenham's win against City was a juicy encounter and entertaining to watch. Focusing on the question who is worth and can make it into the top four, this match had it all, with Spurs ending up on top.

Top team: Spurs gets my vote again. They were much better than the previous game when they experienced a sorry defeat against Wolves. They showed determination and formed a destructive combination.

Top player: Niko Kranjcar, Jermain Defoe and Aaron Lennon formed a deadly trio for Tottenham, a top combination that damned City to defeat. Fernando Torres showed top mentality, crucial for the match and win for Liverpool. His team mates should follow his example if Liverpool want to finally get a good run together.

Top goal: Kranjcar's second for Tottenham was of stubbornly strong top quality. Off a Lennon corner, it looked like he had spilled and wasted the chance, but he stayed up and going and put it in. Cheeky but good.

Flop game: United's win against Wolves was no competition. Manager Mick McCarthy has been questioned about the ten changes he made to the side that beat Tottenham last week. I know the schedule is tight, a lot of fixtures squeezed into a couple of weeks, but that is no excuse for changing a winning side completely.

Flop team: I have to pick Wolves again for making it too easy for Manchester United. You never want to see that as a football fan. It is supposed to be and stay a competition, not a concession.

Flop goal: Portsmouth's equaliser against Chelsea prooved and underlined the Blues' weakness with set pieces once again. It was a cheeky goal that snuck in after coming off two defenders, that should not have happened if Chelsea's back line would have stayed and kept solid. But no discrediting Portsmouth, they have improved a lot since Avram Grant has taken over and just lost out to a last-minute penalty. Unlucky.

Top game: Everton's and Aston Villa's historic results at Stamford Bridge and Old Trafford respectively have to mentioned. But the one to watch, was the strugglers against the cruisers, Bolton versus Manchester City. It was end-to-end-stuff, with referee blunders but still mouthwatering viewing. You did not know which way it was going to go next. City will definitely feel more like it was two points lost rather than a point gained, in contrast to Bolton, who can and will be proud as Larry. 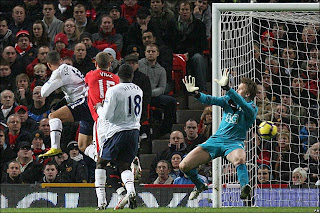 Top team: Villa were brilliant. They put their bodies on the line and threw themselves in against United, stopping and blocking the champions with great tackles and loads of bodies in the box. Especially Manchester City and Chelsea should have a look at this defensive display as they have been leaking most goals from set pieces and should therefore rethink and - structure their defence.

Top player: Ivan Klasnic has impressed me lately. The first goal against City did look offside, but it does not change the fact that the Croatian striker is a thorn in the opposition's defence's eyes. Every point is precious for Bolton's battle and he is the main combatant for them.

Top goal: The second Wigan goal was amazing. Defender Maynor Figueroa spotted Stoke keeper Thomas Sorensen off his line when a free kick was given just inside his own half. The Honduran's quick thinking and exquisit skill, took the ball over and past the Danish goalie. Cheeky and legendary. Andrey Arshavin's winner for Arsenal at Anfield was unstoppable, off the post and in, nowhere near in react for the goal keeper, even if Pepe Reina had wings.

Flop game: Hull City's goalless draw against Blackburn was the only disappointment of the day. No goals, no penalties, no red cards, no controversial refereeing decisions... Just a draw... A rarity this season.

Flop team: What happened with the top two? They seemed disorganised and shaky, especially at the back. I feel the title race is more open than people think with not even half the season gone and the top teams leaking and weakening... I can understand Alex Ferguson's rage in that respect. Minutes, seconds are crucial and can end up being lethal.

Flop player: Tottenham full-back Benoit Assou-Ekotto is facing police-investigation after a clash with a fan - looks like he cannot deal with defeat and being picked on. He is a professional football player and should know better how to deal with situations like this professionally. I say that every time a situation escelates between players, too, they get payed enough to keep their sences.

Flop goal: Petr Cech was furious with his players after he was left stranded when Didier Drogba headed and Everton free kick against Louis Saha's shoulder to see it deflect into goal. Set pieces seem to be the bogey for Chelsea, this match showed it again Everton capitalised well on it. Glen Johnson's own goal at Anfield could not have felt more like a curse. It seems like nothing is going Liverpool's way at the moment. I wonder where or when the fall will end...

Sports - Football - Premier League - Picks of the Weekend
Top game: Manchester City against Chelsea was the battle of the riches. It was not the best display by the referee with some crucial errors that led to both City goals. It was a competitive encounter that could have gone either way, but City created most of the pressure and got Petr Cech sweating most throughout the match. 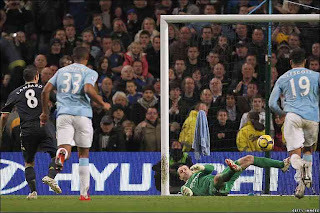 Top team: Manchester City ended up on top. Chelsea keeper Cech struggled to keep up with the pressure. Mark Hughes will be very happy to finally bank a win after the long run of draws and fans starting to doubting the credibility of the side and manager.

Top player: Shay Given was man of the match at the City ground, with a brilliant display and decsisive penalty save against one of the most consistent penalty takers Frank Lampard. Chelsea are starting to shake and leak, to the relief of their rivals and other title competitors. The race is long from over.

Top goal: Wolves' opener stunned Bolton. The more stunned they were when Nenad Milijas turned from provider to scorer with a devil of a strike for the second goal. From over 20 yards outside the box the swing left Jussi Jaaskelainen with no chance. Beauty.

Flop game: Liverpool's goalless draw against Blackburn was and is only worth a yawn...

Flop team: The team with the worst home record faced the side with the dimnest away record - and Portsmouth ended up on top. Burnley looked better but have to keep working on their travelling display.

Flop player: What was Steven Gerrard thinking? At least Martin Atkinson called it right as a dive and gave a free kick against him. But Phil Dowd was not as alert when Hermann Hreidarsson tried out his theatricals on him. Players do not help making the job easier for the referees, in a time where a growing majority call for video referees and stiffer penalties against whiners and divers, i.e. drama queens.

Flop goal: As mentioned above, Wolves' opener stunned Bolton, but looked offside, with three Wolves players clear of the defenders. In the end is was good fortune and play for Wolves and hard luck for Bolton. They had more than enough chances to not only equalise but to run away with all three points, Ivan Klasnic enjoying but missing most of the chances, the one goal he got on target was just not enough.
My Predictions - Actual Results
Arsenal 1:0 Stoke - 2:0
Aston Villa 2:0 Hull City - 3:0
Blackburn 0:0 Liverpool - 0:0
Man City 2:2 Chelsea - 2:1
Portsmouth 2:1 Burnley - 2:0
West Ham 1:1 Man Utd - 0:4
Wigan 1:0 Birmingham - 2:3
Wolves 2:3 Bolton - 2:1
Everton 1:1 Tottenham - 2:2
Fulham 3:0 Sunderland - 1:0
Posted by Sonjahaha at 13:19 No comments: Links to this post

Sonjahaha
Berlin, London, Paris
I'm a passionate sports fan, especially football and cricket, LIVERPOOL and ENGLAND; talkative and curious writer and blogger; German by birth (mother), English by heart (father), and French in progress (hubby, work and home). Love flying, travelling, learning, reading, writing, watching comedy and crime series, documentaries and films; listening to music and the radio, going to the cinema, wining, dining, meeting up, socialising and chatting with friends. Always up for a challenge and a laugh! You can find out and read up more about me and my other passions, thoughts, likes and dislikes on: My general news and life blogs: http://sonjasnewsworld.wordpress.com/ My poems and stories: http://work-thoughts-and-stories.webs.com/ My tweets: https://twitter.com/#!/Sonjahaha & @ByTheMinLFC & @ByTheMinCricket where I am also a regular contributor, covering live football and cricket action mainly.